Always a Bridesmaid, Never a Feminist 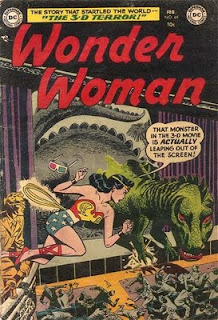 Sometimes I like to follow the trends of the day. What can I say? I can be a slave to peer pressure. This is how I recently found myself at the local cineplex. Given all the attention to, and the supposed hilarity of, the film Bridesmaids, I and some friends decided to take a look see.

For those who haven’t seen the media blitz surrounding this film, it has been billed as the remedy for the “bromance” film (a genre that successfully suckers young men these days ((but that is another entry entirely)). The film’s producers imagined it to be revolutionary to film women drinking, imitating a penis, or defecating in a sink. They, and their admirers, claim that this shows that women can be just as raunchy as men. The New York Times went as far as stating that the film triumphed because it proved that “women can go aggressive laugh to aggressive-and-absurd laugh with men.” Frankly, I was surprised to learn that large sections of our society imagined women as totally humorless. There is also something mighty peculiar about assuming that certain forms of humor are gendered “male,” like toilet humor. It is even more troubling to then assume that such a genre is what accounts for being truly funny compared to other humor, apparently considered feminine. Even the tagline that promoted Bridesmaids, “chick flicks don’t have to suck,” suggests a certain contempt for women. When did that little bit of sexist nonsense start? While I was dozing the new measure of social progress apparently became a film that coupled women with scat jokes. Well GayProf ain’t convinced. When you cut deep into the Bridesmaid’s frosting you realize that this cake is from a pretty stale mix of tired gender assumptions. 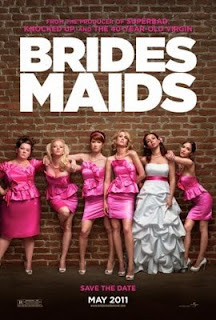 The story centers around Annie, a thirty-something woman whose life appears on the downward spiral. She once owned a bakery in the center of Milwaukee, but by the time the film opens she has been reduced to peddling cheap jewelry in a strip mall. At her most vulnerable, Annie’s BFF, Lillian, announces that she is about to be married and asks her to serve as maid of honor. Annie soon meets the remaining titular bridesmaids, including a rival named Helen. Much of the film’s humor draws on some universal social anxieties about being shown up or losing your close friends. Annie and Helen compete for Lillian’s affections as the plans for the wedding progress. At each junction, Annie doesn’t quite measure up and, in fact, makes the situation absurd.

The film opens with an active sex scene between Annie and the film’s cad (played by the dreamy Jon Hamm). This scene makes it clear, that despite Hamm’s enthusiasm, Annie isn’t having much fun at all. Later she sneaks out of bed to apply ample makeup so that when Hamm awakes he is to imagine that Annie looks that good “naturally.” Much to her dismay, he instead reminds her that they are in a NSA deal and that he’d really rather she depart. She then makes a slow walk of shame down his driveway in the early morning light. Later, when her car breaks down, she apparently can only think of Hamm to phone. He arrives, refers to her as a “fuck buddy” (NB: Heteros, we in the gay community are not amused when you steal our lingo), and then suggests a blowjob as he drives her home. All of this is done, of course, to reveal the Hamm character as a sexist, cold-hearted snake that can only serve to make Annie’s true love more appealing (more on him in a minute). 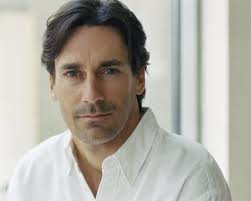 Here’s the problem: using such means to identify the supposedly unworthy men also presumes that women are incapable and uninterested in sex for its own merits (Maybe there is also a divide between the gay and the straight world here, but I’d be more than happy to be on Hamm’s occasional call list. The fact that he wouldn’t expect me to spend the night seems like a bonus). Annie unconvincingly pretends to be Hamm’s equal in the fuck-buddy relationship, but in reality she secretly craves what the film implies all women want: a good man to rescue her. Enter Officer Rhodes, the patrolman with a heart of gold and a mysterious Irish accent. Annie at first refuses Rhodes’ advances, even though the film makes it painfully obvious that he is her last chance for happiness. Rhodes eventually charms Annie by complementing her doomed bakery and offering deep discounts on auto parts. By the end of the film Annie rides off on Prince Rhodes' stallion, in this case in the form of a patrol car. Annie’s life is otherwise unchanged. She does not reopen the bakery (though Rhodes encourages her to bake . . . for him). She does not have her own place to live or even a job. But she has her man, so all will be okay. 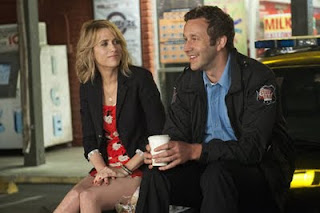 Annie isn’t alone. Many of the other film’s characters talk the talk when it comes to free willing sex, but we find in each case that when push came to shove (as it were) it was just talk. Rita, one of the bridesmaids, had many punch lines involving her desire for sexual adventure. Rita insists that she is hungry for action, demanding that the pre-wedding ceremonies include male strippers and other such things to alleviate the boredom of her marriage. She goes so far as to encourage the ingenue, Becca, to “experiment” and “find out what she likes” in bed. It sounds like sensible advice to me. We see, though, that Rita is much like Annie in pretending to want one thing (NSA fun with male go-go dancers) and actually desiring another (intimacy in a monogamous relationship). In a drunken bout, she confesses to Becca that she and her husband actually have sex quite often. What she really misses, though, are the kisses that he once gave. For her part, Becca never explores her sexuality as Rita suggested. Instead, she remains committed to her husband as ever. Even the character with the least amount of gender conformity ends up safely coupled up with a male air marshal by the film’s closing.

It is not the case that I am knocking monogamy per se. Rather, I am concerned that the film offers it as the only viable option for women (and their only goal). Men, according to the film, can have varied approaches to sex and relationships. They might be in a committed relationship or have fun without being emotionally invested. Women's happiness or despair, Bridesmaids makes clear, depends instead on the quality of relationship they have to a man. Sexual freedom is presented as an emotional dead end and a distraction from the hard work of finding a "good husband."

Despite their relative lack of screen time, it is the men who play the most important roles in these characters’ lives. Even Helen’s competitive struggle with Annie is later explained as being symptomatic of her missing her husband during his frequent business trips. If you think it is about women’s relationships to each other, Bridesmaids suggests, you haven't looked carefully enough at their relationship to men. That alone filters how well they relate to each other.
Posted by GayProf at 5:42 AM

Email ThisBlogThis!Share to TwitterShare to FacebookShare to Pinterest
Labels: It's a Drag to Watch Movies with GayProf, popular culture, sexism, women in popular culture

I used to enjoy going to the movies, but either I've gotten more curmudgeonly, or films have gotten more vapid, or both. This movie appears to have no surprises, coming from the man who brought us "Knocked Up." The messages of that film appeared to be:
1. Children are precious and one must never even mention the word that rhymes with "Shma-shmortion;
2. Children are precious and even if you are a successful, gorgeous woman, if an overgrown fratboy loser without any discernible talents or charms gets you knocked up, you should immediately give up everything you've worked for in life in order to partner with this man: only then you will be Complete As A Woman;
3. Once you are Complete As A Woman, you are destined to make the father of your child miserable for the rest of his life by becoming a shrew (a la the heroine's sister and her husband).

Having sat through *Knocked Up,* I'm hapy to sit out *Bridesmaids." For all it's focus on women characters, it sounds like it doesn't pass the Bechdel Test.

Monogamy is not my only option for happiness?

Thanks for telling me now that I'm in my friggin' 40s, GayProf! Ya gotta time machine or something like that to help me make up for all that tragically lost time?

Haven't seen the movie, and probably won't, but you do know that the white, hetero culture has been stealing from gays and blacks and other 'minorities' for decades.
Pat Boone doing Tutti Fruiti is always exhibit #1.

again happy to have no TV, and therefore escape the relentless messages of the commercials...

I used to complain that I was tired of movies without women as central characters (e.g.: not girlfriend/damsel in distress). I think I'm more depressed by a movie all about women that isn't really about women at all.

PS. Ok, not to go for the bathroom humor, but my verification word is "weani". How Beavis and Butthead.

Hollywood movies sucke total fucken asse, every single one of them ever made. They are total fucken garbage designed to sell shitte no one wants. I'd rather hammer nails through my dicke than sit through a goddamn fucken movie.

please tell me someone else bought your ticket?

I don't know what is more disheartening: a) the new bevy of female comics who tell everyone this really is empowering to women or b) the pseudo-feminism of summer blockbusters in which we are told that it isn't marriage but "provocative" clothes or the lack thereof that make a woman powerful

PS. while this review didn't ruin my desire to see this movie, which was and is nil, I think your Latinas in the media review has totally fracked Glee for me ... oh well, bound to happen anyway. But one day I will write that post about how racism is masked by psuedo-anti-homophobia and homophobia is masked by pseudo-anti-racism on tv

ps. blogger says I am "anonymous" but you and I both know it's susurro ...

I have just installed iStripper, and now I can watch the sexiest virtual strippers on my taskbar.