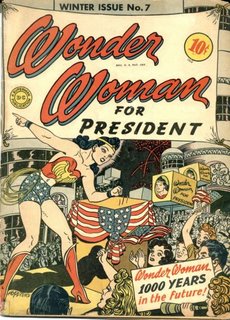 We are all a little dizzy with some good electoral news for a change. My gravitas might be a bit lighter. Okay, that’s a lie. My gravitas never gets lighter. We will have plenty of time, though, to talk about the problems in the nation as imagined by GayProf. As lefty folk, let's all take a moment and savior our victories.

I don’t have much new to add that hasn’t been said by other blog folk. Let’s recount (no pun intended) the good events of yesterday and today, shall we?

Nancy “San-Francisco Liberal” Pelosi will become the first woman Speaker of the House in the history of the United States. Of course, only around 70 women currently serve in the House out of 435 (representing about 16 percent of the total). This is shocking given that women are roughly 50 percent of the total U.S. population. Ooops – See? I do have trouble keeping the gravitas in check. 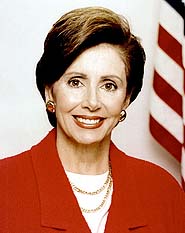 Donald “Talking-Tree-From-Wizard-of-Oz” Rumsfeld loses his job. Hopefully Rumsfeld will see this as a chance to spend some quality time whittling.

Arizona “The State that Gave Us Crazy-Ass Barry Goldwater” voted against a proposed ban on gay marriage. It infuriates me that the rights of a minority would be left to the decisions and whims of the majority. Still, the good people of the Grand Canyon State reject bigotry and fear. Go on with your bad self, Arizona. Have a Cosmo on me.

Deval “I Once Worked for Bill Clinton” Patrick became the first African-American governor of Massachusetts. Much to my chagrin, though, Massachusetts voters mysteriously rejected a proposal that would have allowed grocery stores to sell liquor. Damn you, Massachusetts.

Robert “President of that Bonfire University” Gates will likely become the next Secretary of Defense. While his politics often leave me cold and his tenure at the CIA made me nervous, I will say that Gates always struck me as a reasonable guy, at least as a university president. He is not rash nor filled with ego. Perhaps he can bring a touch of sanity to an impossible situation in Iraq. 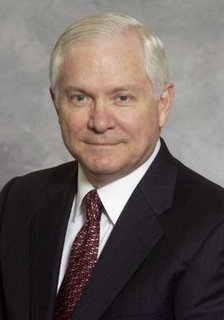 Electronic “I Eat Ballots” Voting Machines showed themselves to be so unreliable that even Republicans complained about them. We might actually get momentum to return to actual paper records. Canada does it, why can't we?

New “Land of Enchantment” Mexico retained its Democratic Governor and Senator. Sadly, the House District One race is still too close to call. **Sigh** Don’t disappoint me, New Mexico. Think of our way of life!

Dennis “The Hutt” Hastert will no longer have a prominent position in the House. After his reign as Speaker, I think we should start imposing weight-limits on political figures. If you weigh more than a baby Steinway, no leadership role for you. How could he get any work done when at least 60 percent of his day must have gone to eating? 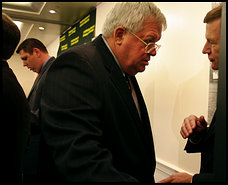 The Democratic “We are the Actual Compassionate Conservatives” Party now controls the House and might control the Senate. Under the U.S. Constitution (which, I recognize, we rarely bother to look at any more), the Congress should be the most powerful arm of the government. If the Democrats in Congress really wanted to do so, they could actually govern the nation. I am not saying that we will see an Andrew-Johnson era of Congressional power flexing, but it would be nice.

Georgie “The Most Hated President in History” Bush got a pimp-slap from the American People. We did it with our ring-hand, too. When Bushie claimed to be a “uniter,” who knew that his tactics would involve getting a combination of left and right forces together in their mutual contempt for him?

Karl “Why Aren’t I in Jail?” Rove will no longer be given the title of political genius. Indeed, his usual tactics of using hate, especially of queer folk, failed horribly to deliver the GOP a win.

South “Do People Actually Live in This State?” Dakota rejected a sleazy attempt to restrict a woman’s right to choose. They also saw through right-wing attempts to highjack and manipulate the left’s language about women’s self-determination and access to healthcare.

All of this makes GayProf a bit more content. Well, at least until I am declared Queer Guardian of the Nation.
Posted by GayProf at 2:11 PM

You got my vote.

Probably because you guys have this weird habit of voting for everything at the same time. Presidents, representatives, referenda, dog catchers, movie stars, what-have-you. All there on the same ballot. It's all much neater in Canada. We only vote for one thing/office at a time. Hence easier for little old ladies to count.

It is a pretty good day isn't it?

As Queer Guardian of the Nation, could you arrange to have Stephen Harper join Rumsfeld on a neverending vacation? We Canadian Queers will worship at your altar of gravitas ... on our knees.

One thing I noticed missing from your post: an all out Glory Glory Hallellujah!!

If GayProf becomes Queer Guardian of the Nation, will he stop referring to himself in the third person?

Don't forget, over here in Virginia we booted neo-Confederate racist George Allen from the Senate, most likely putting the last nail on the coffin of his political career.

True, we picked a raging misogynist instead and at the same time declared me a second-class citizen, but hey, for progressive Virginians getting Allen out of power is a tremendous step.

A most excellent synopsis of the Democratic bitch-slap, GayProf!

Ah, sadly, Gayprof, we still have a good ol' statutory ban on gay marriages here in the Grand Canyon state. The ridiculous proposition (that is losing by a margin so slim I'm embarrassed to say I live here) would not only have defined marriage as one man and one woman, but denied the ability of government entities to provide similar unions to gay people. They're calling it a loss, but there are still votes to be counted. The pig and veal-calf rights bill passed by a 20% margin, though.
(DAMN this state sucks. My only consolation is that I can buy liquor at any grocery store, to drink my sorrows away.)

You forgot Arizona. They rejected a gay marriage amendment...the first state to do so by ballot box.

They did go ahead with a raft of xenophobic other crap, but hey, it wasn't ALL bad.

"Much to my chagrin, though, Massachusetts voters mysteriously rejected a proposal that would have allowed grocery stores to sell liquor. Damn you, Massachusetts."

I'm not positive, but I don't think you can buy alcohol in grocery stores anywhere in New England. That's a crazy Western thing I first encountered when I was 15. Blew my mind and I still find it strange.

Yes, Tuesday was a good day. But the US still has a long, long way to go.

"It infuriates me that the rights of a minority would be left to the decisions and whims of the majority." - GayProf

The irony of this is... that this is what happens in a democracy. The majority opinion rules. Of course, it goes without saying that neither the majority nor the minority are necessarily "absolutely" correct in thier opinions.

The flip side of it would be the minority controlling the rights of the majority... which, more often than not, is the case in American politics (where the controlling minority is generally the ones sucking up to the corporate campaign donations).

It is a matter of perspectives, neh?

Doug: Yes, please give me a green one.

ZeeGeezer: Well, okay, fair enough -- Still, not having any type of paper record for our votes is a bad, bad idea in my book.

Torn: It was a much better day than I thought it would be. :-)

Cooper: Steven Harper is your problem. Can't you call for a vote of no confidence or something?

Anon: Sing it on the mountain, baby.

Chad: Cleaning out the evil was a far better result than probably the people who often won: No Santurom, no Allen, no crazy Montana guy.

Pacalaga: Yeah, and AZ passed the English-Only thing. Yuck! I tried to focus on the positive, though.

Mike I wouldn't forget Arizona. Arizona, after all, used to be under the control of the great New Mexico.

Laura: Yes, the U.S. does have a long way to go. Nor do I think the Democrats will be able to affect much change. Still, they might be able to at least slow down the administration a bit. Remember, though, I was trying to be positive. It's out of character for me, so I am working hard on it.

Seeker: Fair enough -- Except that the U.S. government allegedly operates based on a Constitution that protects individual rights against the authority of the government or the majority.

That is wonderful for arizona, but I'm surprised that your LatCrit head didn't rear itself regarding other ballot initiatives in the state. And what is wrong with you people in Massachusets? No liquor in grocery stores? It's a wonderful thing to me. That's why CA is still so wonderful (if you ignore the governator, the red valley, and OH) I recant.