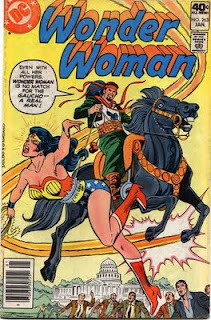 Those of you who have followed the slow release of data from the Census Bureau (and who hasn’t!) know that the nation’s demographics have shifted considerably over the past ten years. The Midwest, once the metaphorical and population “center” of the nation, is hemorrhaging people faster than Sarah Palin’s campaign team. Part of that change, of course, is the combination of Midwestern urban decay, failing infrastructure (Why pay taxes?), and mass relocations to "sunbelt" areas in the southwest. Another contributing factor, though, is the rapid growth of Latino populations in the border states. Census officials estimated that there were 45.5 million Latinos and Latinas in the United States as of 2009. This represents an almost 29 percent increase from the 2000 Census report of 35.3 million Latino/as.

What has surprised me is that our national entertainment industry has been remarkably slow to reflect this new reality. Latina/os might be the largest minority, but you would be hard pressed to find substantial representations on either broadcast or cable television. Some networks, including Oprah’s OWN, Lifetime, or FX, have zero (0) recurring Latino characters or hosts in all of their 24/7 programming. Those that do exist on other networks are sadly retreads of some pretty worn out stereotypes. Latinos remain relegated to the supporting cast. This is true despite the fact that various corporations have become increasingly hungry to grab a slice of the Latino economic pie. 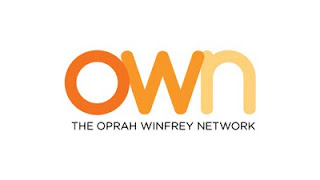 It strikes me that the most visible characters currently on the air are Latinas. Yet, this is not necessarily good news. Two major roles define the options for Latinas on television: the sex bomb and the steely enforcer. The first has deep roots in this country. Since way back in the nineteenth century, mainstream representations of Latinas have most often presented them as tempting “tamales” who turn out to be “too hot to handle.” Latina women became convenient metaphors that legitimated multiple racialized assumptions as the U.S. contemplated war with its neighboring republic. Latinas were construed as always sexually available to Euro American men even as they were simultaneously presented as duplicitous, scheming, and dangerous. Euro-American travel writers first circulated these types of images to suggest that "immoral" Mexico needed a U.S. invasion to satisfy God’s supposed plan of manifest destiny (You can read about this and many other fascinating elements of nineteenth-century Chicano history when you purchase a copy of NERPoD from a fine on-line book retailer near you).

Such images live on in the conniving and fickle character played by Eva Longoria on Desperate Housewives; Colombian-born Sofía Vergara’s “trophy wife” role on Modern Family; and even Naya Rivera’s role on Glee. The last character, Santana López, hits many of the hallmarks of the stereotype. López uses her sexuality, often presented as irresistible to the white men around her, to satisfy her ambitions or as part of a larger scheme. At the same time, she can be depended upon to enact the “loca” traits that make her untamable. Quick tempered and cruel, López shows she is always ready for a fight. This includes a recent episode where she claimed to have razor blades hidden throughout her hair (!). Perhaps the revelation of her same-sex love interest will redeem this character, or at least steer her from being a twenty-first century incarnation of “wicked Felina.” 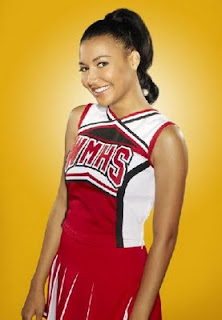 Another less noticed, but still identifiably stereotypical role, appears in the police-procedure genre. Many shows, like Law and Order, Eureka, or the doomed Detroit 187 feature the tough Latina enforcer. While I can’t say for sure, it seems like this version of Latina can find some of its roots in Aliens (1982). That film introduced the memorable character Private Jeanette Vásquez, a tough-as-nails marine. Here was a Latina character who got to do things on screen that had previously been reserved almost exclusively for men, including handling some really big guns. She also met her demise memorably in an altruistic blaze of fire, ultimately hugging a grenade rather than being taken by the titular aliens. Reportedly, the Vásquez character left such an impression on Gene Rodenberry that he intended the security officer on Star Trek: The Next Generation to be a comparable Latina figure (which was later dropped when he cast blond Denise Crosby for the role, contributing to Star Trek’s long history of failing to include Latino/as in the future – but that is another entry). 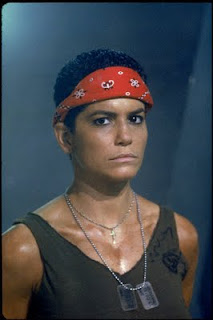 What I call the “Vásquez type” presents Latinas as figures who bend traditional gender conformity through their military/police skills. They are often presented as invaluable to the white leads in solving crimes, battling aliens, or generally kicking ass. They know their way around a gun, wear their hair in a sensible bob or poneytail, and can more than handle themselves in battle. All of that is nice . . . but these Latina figures are also always ancillary to the main white characters. If they provide the muscle, than it is up to their white (usually male) partner to provide the problem solving skills which truly stops the criminals/aliens/mayhem. Representations of their personal lives range from non-existent to deeply troubled. While generally I appreciate their rejection of gender conformity, it can nonetheless becomes a racial marker that only serves to highlight the more authentic masculinity of the (white) male lead and/or the more alluring femininity of the (white) women around them. Latinas become characters who have not quite mastered the mainstream gender rules, and therefore remain outside of society. 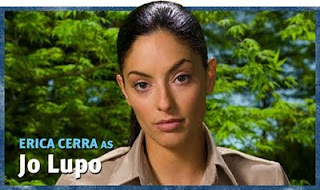 Keep in mind that those are the most positive options currently seen on television. Most of the time, television networks prefer to imagine that Latinos don’t exist at all. Even shows set in geographic areas with significant Latino populations manage to sideline those inhabitants or simply turn them into background “color” that spices up the main white characters’ lives. As I have talked about elsewhere, the USA show Burn Notice takes place in Miami but manages to only grant roles for Cubans as either victims (usually women) or as villains (either men or women). Whatever the case, both are easily dispatched after one episode.

For obvious reasons, I am the most sensitive about this phenomena when programs are set in New Mexico. My home state, as everybody knows, has always had a non-white majority population. Recently, the census bureau also revealed that Latinos are now the largest ethnic group in the land of enchantment. Making a show set in New Mexico without showing Latinos is like making a show set in Washington, D.C. without showing idiots. Nonetheless, that is exactly what happens in USA’s In Plain Sight or the critically acclaimed AMC show Breaking Bad. The first, which centers of the blond lead, has a token Latino character who is a Dominican baseball player. Apparently the USA network could only imagine Latinos as recent immigrants, thereby ignoring the Latinos actually residing in the state whose families have been there for generations.

Breaking Bad, also set in Albuquerque, does little better. Like in Burn Notice, Latinos zest up the drab background by providing Spanish-language music, low-rider cars, or colorful expressions. When they aren't providing the literal and metaphorical salsa, they appear as threats to the main white leads. These roles as side characters serve to contrast the normalcy of the two middle-class white characters. Latinos, as dangerous drug dealers, represent an upending of the “quiet” life of the white school teacher and his former student. The series lead, we are told, had no choice but to enter the drug underground. He begins manufacturing meth in a noble attempt to provide for his family after his imminent death from cancer. Latino drug dealers, on the other hand, are shown to be motivated only by greed and violence with few redeeming characteristics. They are almost always recent arrivals in the country. 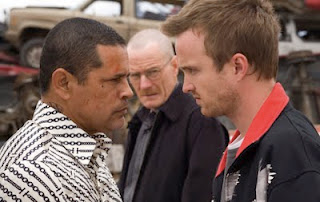 I am disappointed that television programming has failed to understand or represent the variety of Latino/a experiences in the United States. This is even more troubling when we consider that many (most?) of the nation’s other citizens probably depend on television as the only venue through which they get to know the United States' largest minority. For the most part, it seems that television executives consider Latinos too much of a political hot potato to represent fairly. When they do make an appearance, they enforce the notion that Latinos (and a multi-cultural society in general) threatens to upend the national status quo through their supposedly hyper sexuality and unquenchable thirst for violence.

Some of this might change when media monopoly Comcast launches its new English-language Latino network in 2012. I’m not holding my breath, though.
Posted by GayProf at 11:53 AM 14 comments: