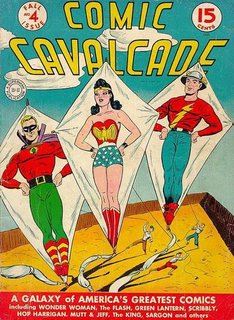 Hey, queer folk, we need a new flag. Don’t get me wrong, I appreciate the sentiment behind the rainbow flag (let’s call it rainsy, for short). It’s a groovy left-over from the late seventies when optimism still existed in the U.S. Yes, the seventies prompted people to think that we would soon solve our problems with racism, poverty, sexism, and homophobia and create a modern utopia. We all know those days are over.

According to legend, Gilbert Baker, our own little gay Betsy Ross, created the rainbow flag for a pride march in San Francisco. With nothing but a dream and a thimble, Baker sewed the first rainsy to connote the queer community’s diverse experiences. Each of the different bars represents sex, healing, spirit, nature, and . . . um . . . what were those other things? I think granola might be in there. Um, didn’t the pink represent Cher? Damn -- I forget the rest. 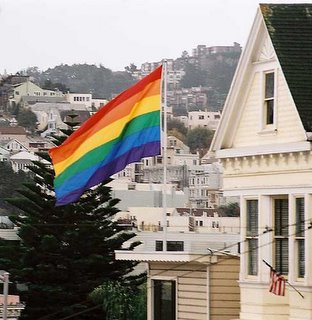 For almost thirty years, rainsy has flown over queer clubs and posh apartments in major urban areas. So, why do I want to drop it?

My dissatisfaction with rainsy is multiple. First, the rainbow lacks distinction. Many folk still don’t know that the rainsy is ours alone. Jesse Jackson used the same symbol for his Rainbow Collation. At least one hotel chain uses a similar flag on their buildings, and it’s not to attract a queer clientele. Even the Taco Bell flags seem suspiciously close to our flag.

Though I have no evidence, I have always been suspicious that the rainbow emerged from a love of Judy Garland. You know, as in “Somewhere over the. . .” Sure, the rainbow could represent our diversity (We won’t talk about the few queer folk who don’t want to think about racism within our community – that’s another entry entirely). Do we really want a symbol, though, that has as much subtlety as a United Colors of Benetton advertisement?

More than anything, though, rainsy simply isn’t angry enough for me. I want a flag that strikes fear into the hearts of evil Evangelical Christians. Make no mistake, the evil Christian folk consider themselves at war with us (not all Christians are evil, obviously, I am just talking about the evil ones). We need a battle flag. Something that will stop them cold in their tracks. Who has ever trembled at the sight of a rainbow?

See, this is why we need a flag with a bit more aggression. How about a flag with a lumberjack lesbian wielding a chainsaw? Or how about a flag emblazoned with a drag queen wielding sardonic wit? I’ll leave it to the graphic artists among us to figure out how to represent that. Of course, I might be partial to a new flag with Wonder Woman kicking a homophobe’s ass. Who other than the Amazon Princess can satisfy both gay men and lesbians?

If those symbols don’t work, why not return to the Pink Triangle? Yeah, I understand the triangle’s connotations with death make it problematic. Nazi Germany created the Pink Triangle to mark gay men whom they imprisoned and murdered in concentration camps (lesbians did not often face persecution under Paragraph 175). Returning to the Pink Triangle forces all of us to face the horrors of the past. Men and women with queer desires faced persecution and often death throughout much of history. Yet, we continue to survive. Let’s remind the general public that we aren’t going to tolerate any more of that shit ever again. 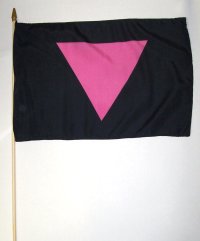 When the war is over, maybe then we can return to rainsy. Until then, though, let’s get in touch with our angry side as we sharpen our swords and lift our shields.
Posted by GayProf at 10:52 AM

I like the rainbow flag honestly. Its funny that you mention this because I was thinking of it at the gym today, how it represents each of the different people in the community. However, I agree that maybe we need something more agressive but not necessarily to replace the rainbow floag. A banner to rally the cause. A battle flag!

I like the rainbow flag too, but I recognize the problems you mentioned.

The pink triangle- whatta thought. How about pointed upward (towards life, not death), maybe with some sort of affirming symbol?

Sometime around Pride of last year, I was having lunch with blogger Evil Buddha, in the Soho Wendy's. The man in front of us had a huge number of rainbow flags in a shopping bag. I noticed that his flags had the original EIGHT colors that Gilbert Baker's flag had, before the lack of commercially available fuschia fabric caused him to delete the fuschia (and then turquoise) stripes from future versions. I commented on this to the man, who of course turned out to BE Gilbert Baker, and we chatted across our Frosty's during lunch. Nice man. Nice flag.