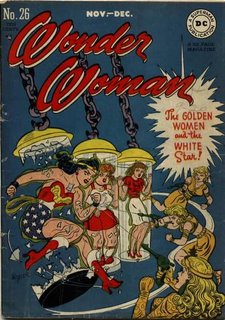 Gay men navigate conflicting visions of gender ideologies. We should think of ourselves as being gender renegades. Drag queens, at one end of the spectrum, show that gender and biology needn’t be assumed as linked. Likewise, the rugged, mountain-guy can disrupt assumptions that all gay men conform to the popular media image of effeminacy.

Some gay men, however, harbor fears of femininity and become corrupted by desires to prove their masculinity. An undercurrent of hatred of all things feminine exists in many queer circles. One need only glance at gay men’s personal ads to see the ever-present “no fems” listed in numerous postings.

I think of gender as socially constructed. In other words, what we presume to be “naturally” male and female is contingent on the particulars of society and time-period. We learn to recognize certain behaviors as supposedly performing masculinity (playing sports, carving a hunk of wood, etc.). Other behaviors we presume to be feminine (cooking, caring for mewing brats, etc.).

I can’t explain why some individuals are more drawn to one set of performances over another. The queer community, though, has tremendous complexity and we see examples of all sorts of expressions of individuals’ sense of gender identity. Yes, they are carvers of wood hunks and gourmet specialists (and even individuals who do both). In most instances, people express themselves as they feel they want to be seen. Still, I am concerned that some elements of the queer community become unknowingly enslaved to their desires to be seen as “manly.”

What bothers me are the ways that expectations about gender performances destroy these queer folks’ sense of self-esteem. They, in turn, seek to police other queer folk’s gender identities. 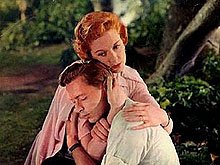 In European/ Canadian/ U.S./ Australian cultural milieus, sexuality and gender identities intertwine. We learn early, for instance, that effeminate men and same-sex desire have a link in our society. One needs only think about the 1950s film Tea and Sympathy. In the entire movie, the words “gay,” “homosexual,” or “hot-man-on-man action” never once appeared. Yet, the audiences know that the students accuse Tom Lee of being a homosexual. Why so? Tom played folk music, sewed his own drapes (!), and liked to attend tea parties with faculty wives.

Tom’s fellow students tormented him by calling him “Sister Boy.” Really, they should have harassed him for making some ugly-ass drapes. Instead, Tom’s violation of gender norms leads to an automatic conclusion of same-sex desire (Tom, by the way, wasn’t really gay in the film. The message of the film is to be nice to sensitive straight boys, but does nothing for gay men – that, though, is another post entirely).

Links between violating gender norms and same-sex desire lead many gay men to an obsession with proving that stereotype wrong. Given that gay men often spent their lives besieged by negative imagines of gay men that traded on effeminacy, it is no wonder that some become hostile to all things feminine. Many of my gay male students, upon identifying as gay, quickly disavow any association with “flaming queens.” Part of this has to do with my location in Texas. Yet, I think that elements of what they say can be seen everywhere in the queer community. These students see any signs of effeminacy as only reenforcing stereotypes of gay men and “making it harder for the rest of us.” Some gay men get caught in the trap of not wanting to be seen as “sissy,” even as adults. I am not immune to these gender pressures. At times, I still find myself questioning if I will sound too nelly. We have to learn to lose this type of gendered garbage.

I have seen first-hand the extremes that some gay men will go to prove their masculinity to themselves. Rather than owning that they were the little boy who couldn’t catch the ball, they spend their adulthood compensating. Let’s call it, “Daddy Doesn’t Love Me Blues.”

Some gay men feel, probably subconsciously, that they must conform with masculine ideals because they are gay. They feel a desperation to distinguish themselves from other gay men. These men, though, continuously fail to recognize the actual diversity and complexity of the gay community. They don’t acknowledge that many gay men, unlike their experiences, had no problem catching that ball as a child and, therefore, feel no need to try so hard. Nor do they want to know the other gay men who find such ball-playing games silly (I am in the latter category, btw).

Gay men who unconditionally eschew either real or representations of queer effeminacy show the pervasive homophobia within the queer community. In their quest for an elusive and unattainable vision of a manly-self, they become determined to discredit epicene men from claiming their place within the gay community. They create a scapegoat within the community, but never truly part of their community. Effeminate gay men become those who can hold the blame for other gay men’s feelings of political, economic, social, and even sexual inadequacies. What enrages me is the attempt of these self-proclaimed manly men to rob other gay folk of their full dimensionality. These men claim to be above the performance of feminine traits, a claim both sexist and homophobic. Rather than being seen as one type of communal expression, effeminate men become a sign-post for what some gay men fear being. They dread being seen as deviant.

In many ways, gay men are more sensitive about attempts to perform masculinity. For this reason, we are also often better gauges of those with authentic inclinations and those who pretend to be something they aren’t. We need to challenge the poisonous dynamic of those who fear the feminine in themselves and others. Unquestioningly embracing a manly ideal of a strong, ball-throwing, impassive, independent individual sets us down a perilous road. It also distorts or eliminates the multiplicity of identities which inform our queer experiences.

Our silence obscures the truth of the total queer community. We should embrace that our queer desires make us deviant. Our sexuality means we will never truly be "one of the guys," regardless of how many home-runs we may hit. But that deviancy also creates our sense of unity. Our deviancy can challenge, rather than reenforce, expectations about gender.
Posted by GayProf at 3:26 PM

Brilliant. Precisely my opinion, to the letter. By coincidence, I'm presently mulling a post in this regard, and since mine will be far less scholarly, I may need to link this, within.

I like the central idea of this excellent essay. It also goes a ways to explain why you like Wonder Woman so much. She broke the mold for women in the 40s by not doing what was expected of a woman.


BTW, ever wonder what Dr. Marston would have thought of Dr. Wertham? It was a shame that the very untraditional Marston didn't live to see his creation become a target of an extreme traditionalist attempted to force his views on the nation.

It’s funny for me to grapple with Wertham. On the one hand, he showed himself as totally wicked, homophobic, and sexist. On the other hand, he might have had a point about comics’ homoerotic content.

If he didn’t use his ideas for evil, I would find his readings of Batman and Robin, Wonder Woman, and others as transgressive. After all, he pointed out that something more went on in the batcave than forensic science. It’s funny how one’s point of view matters there. He saw comics’ homoeroticism as dangerous, where I find it good, sexy fun.

Reading backwards, and only came across this now.

*Claps*m. Couldn't agree with you more.