The Face of Gravitas 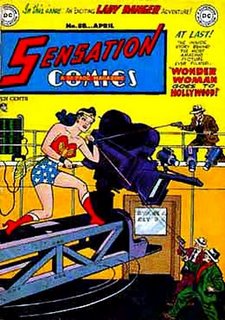 One of the things I love about the emergence and dominance of DVD technology has to be the Director’s Commentary function. My inner (and outer) nerd, for instance, loves to hear about the blow-by-blow decisions that Ridley Scott made in the production of Alien. Who knew they tortured the shit out of that poor cat?

Alas, my plans of being a great film-maker have not come to pass – yet. This failure might be related to a lack of an imaginative plan for a big screen epic. One of the reasons I became a historian, after all, had to do with my limited ability to create fiction. History already had all the characters and plot laid out.

Actually, I really am not all that interested in technically directing a movie. That seems like a lot of work and I don't have that much spare time. Tomorrow, for instance, I want to learn how to make pancakes. Rather than actually doing all of that work, I just want to deliver my own director’s commentary.

Where can I channel all of my internalized dialog? Why, of course, my little bloggy. So, dear readers, let’s go behind the scenes of the Center of Gravitas and discover how I made a key decision. When one thinks of this blog, one can’t help but think of Wonder Woman. What other figures, though, contended for the face of gravitas? 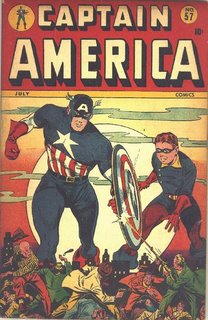 Pluses: Using Captain America would have connoted a certain level of irony in the blog. Juxtaposing the unquestioningly patriotic Captain with a blog that has a healthy suspicion of U.S. foreign and domestic policy appealed to me. Who couldn’t love the Captain's campy existence?

Reasons for Rejection: The pluses of the irony simply couldn’t erase Captain America’s innate squareness. Moreover, no matter how campy, Captain America covers always seem to be a bit of a downer. Even in the forties, somebody always seemed to be shot or stabbed. Everybody knows that's not war is really like. Finally, Bucky grated on my nerves like the Bee Gees. 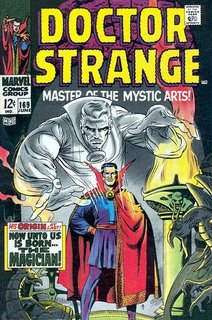 Pluses: I groove on the good doctor’s vision of the universe. He has a firm commitment to cosmic justice and works to maintain balance and harmony. Oh, who am I kidding? It’s really all about the long flowing cape and glittery fashion accessories.

Reasons for Rejection: Though I knew he existed, I hadn’t really read much of Dr. Strange until Dean pointed me to him some three months after the start of the blog. Sorry, Doc. 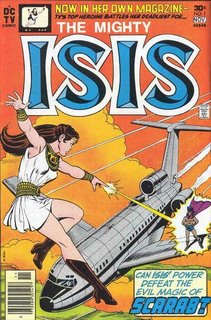 Pluses: Like the Amazon Princess, Isis held me captivated when she appeared on televison. Plus, her alter-ego worked as an archeologist. That’s kinda close to being a historian. She also can kick some serious ass while looking great in an Egyptian mini-skirt.

Reasons for Rejection: Isis existed first as a televison creation with a comic book that followed. With a scant eight issues, there simply would not be enough cover art to keep the blog afloat. Also, unlike Wonder Woman, I never owned the Mego Isis doll. I figured I had pressed my luck enough with my father. Besides, Isis always seemed like a pale imitator of the greatest superhero ever – Wonder Woman. 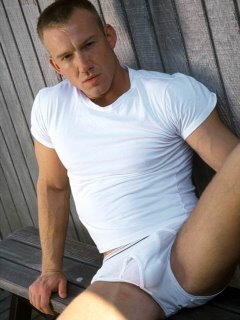 Pluses: There would be a quasi-legitimate reason to search fo semi-naked men every few days. It would also leave little doubt that the blog had a gay, gay man as its creator. Further, it's pictures of semi-naked men. It’s win-win.

Reasons for Rejection: Everybody reads blogs at work. 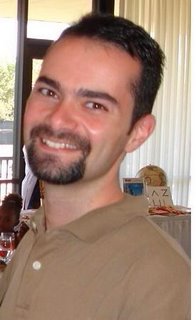 Pluses: I am actually, you know, the author of the blog. There would also be the appeal to my vanity. Let’s face it, anybody who keeps a blog has a certain level of love for themselves. I also can kick some serious ass while looking great in an Egyptian mini-skirt.

Reasons for Rejection: Ultimately, my self-criticism would outweigh my vanity. Looking at images of myself over and over would get less appealing as time passed. Not to mention I only have a total of three digital pictures of myself. 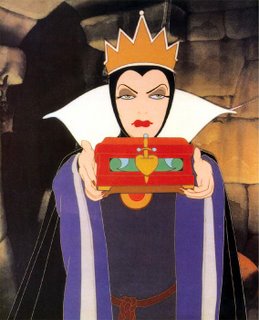 Pluses: She is an evil queen -- Enough said.

Reasons for Rejection: Some people might object to her whole homicidal mania --Whatever. 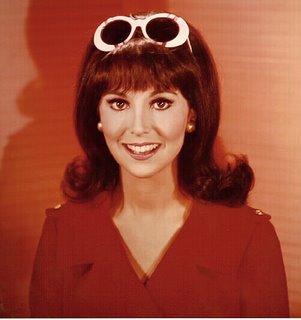 Pluses: Watching reruns of That Girl informed much of my identity between the ages of thirteen and fifteen. True, I never quite mastered that flip. My allowance did not permit the thirteen cans of Aquanet per day that she must have used. Still, I did envision that my adultlife would involve living as a struggling actor in a funky New York apartment that I decorated with $50,000 worth of furniture.

Reasons for Rejection: I love Marlo Thomas and her lefty, lefty ways. Still, her character, in retrospect, tended to be a bit of a bubble head. What type of message is that for the kids today? Additionally, Ann Marie committed the unforgivable sin of dating the biggest dork in New York, Donald. 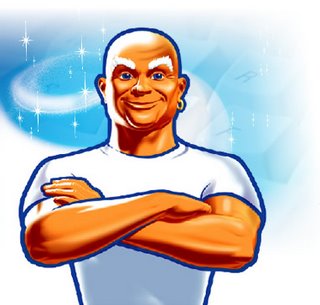 Pluses: Mr. Clean runs a close second to Anderson Cooper as the most frequent guest star in the blog. What isn’t there to love? He spends most of his days gossiping cleaning with bored housewives. He has an astounding body that would draw lots of attention on any Big Muscle site. I imagine he also knows the proper way to load a dishwasher.

Reasons for Rejection: Alas, Mr. Clean still refuses to be totally out of the closet. That will just never do for me. Also, I fret enough about my own receding hair-line (see above). Selecting Mr. Clean as my alter ego would create too much of a self-fulfilling prophecy. Some people might also object to his whole homicidal mania as well.

In the end, there could only be one face of gravitas. Wonder Woman has the full package. She is as beautiful as Aphrodite, wise as Athena, swifter than Mercury and stronger than Hercules. Just like me. 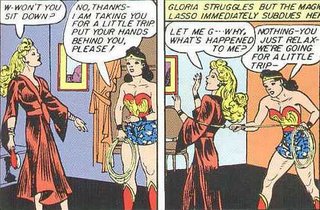 Now, if you will excuse me, I have to finish sewing those star-spangled panties.
Posted by GayProf at 10:09 AM

"Let’s face it, anybody who keeps a blog has a certain level of love for themselves."

A certain level??? I thought we were all egomaniacs! *LOL*

Yes, but doesn't she have a vagina?

"It's my family, Superman. I'll do what I must to protect it. That is the only promise I can give."

No one can resist the golden lasso. It binds all who are encircled and compels them to tell... the truth!

OMG! Prof, we will never fight over men. That Girl's Donald was HAWT.

I must admit, GayProf, even I twirled around and pretended to be Wonder Woman as a kid, it's truly an inspired choice!

Of course, I also pretended to be Batman, Superman and He-Man so I had my butch side too, just thought I needed to clarify that.

Excuse me, I have to go find my deflector bracelets.

Hey Prof, you're hot! Let's do dinner next time you're in Youngstown, Ohio (which will probably be never...but a guy can dream) :)

Aahh, Thanks Anonymous. You are sweetie.

Perhaps one day I will gas up the invisible jet and see if Cleveland really does rock.

Cleveland rocks, Prof, and so does Youngstown (or Y-town, as we locals call it). We can have drinks and a light repast at The Cedars, enjoy some scorching good rock 'n' roll onstage there, and repair to my modest apartment where we can "discuss history", heh. Maybe make some history of our own. ;)

I'm a 49-year-old straighty, very comfortably secure in my sexual orientation (despite what certain gay friends say about a six-pack of beer). I also have no urge to cross-dress, and have no gender-identity issues. Nevertheless, I would be thrilled to wake up one day and discover I was Ann Marie. I mean, who [i]wouldn't[/i] want to be gorgeous, terminally upbeat "tinsel on a tree" with a devoted romantic interest, great wardrobe, great apartment and no economic worries (thanks, Dad)? Mary Richards may have turned the world on with her smile, but Ann Marie turned the world on just by breathing. God, I miss the sixties sometimes.